Tenbury Community hospital is one of seven hospitals across Worcestershire offering a range of inpatient and outpatient services. They support people to recover from surgery or illness when they don’t require acute care but neither can be treated at home. Tenbury is a key part of the local healthcare system.

Ireton Home Farm is a 4th generation family run dairy farm in Derbyshire. The 300 acre farm has 100 milking cows in the Holstein herd with all fields down to grass except for 25 acres of forage maize and 80 acres of grain.

Daylesford began building a new unit to support their ever expanding food production kitchens. Tim Field,Head of Sustainability,commissioned Mypower to install a 108 kWp system which will help them avoid over 24 tonnes of CO2 emissions every year and save over £480,000 on electricity bills.

After discussions with Mole Energy - the green energy arm of Mole Valley Farmers, Mypower install a 172kW array along with six inverters to convert energy into a useable form at Lye Cross Farm.

William Gilder has a real focus on reducing his business's environmental impact on the local area. The solar PV system maintains this focus by significantly reducing the company's carbon footprint.

Dawn Foods is a leading bakery manufacturer specialising in bakery products and ingredients. Dawn's production and cold storage facilities operate seven days a week consuming in excess of two million units of electricity per annum. Their commitment to a more sustainable future led them to solar PV.

Far Peak Business Park is located near Northleach. Mypower designed and installed a 49.83kWp, making maximum use of the available roof space. Utilising the 30% grant available (saving £11K) in Gloucestershire, Far Peak will achieve an 22.8% ROI.

Knowing their carbon footprint was high due to the nature of their business, solar PV gave them the perfect opportunity to significantly reduce their environmental impact and energy costs. With the 30% gloucestershire renwable energy grant, they received £40k of free grant funding.

Goodridge Business Park is home to a number of commercial units owned by Delaney Mackay Lewis Ltd. As a part of their refurbishment programme, Delaney Mackay Lewis were looking to make the site attractive to potential tenants, and this included improving the site's environmental credentials.

EA Chamberlain is the landlord of various commercial buildings on the Nailsworth Mills Estate. Their aim is to generate electricity for as many of their tenants as possible, firstly for the obvious environmental reasons but also to provide them with better value electrical power than their usual suppliers.

Hugh Symons is one of the UK's leading documents scanning services providers. The 483 solar PV panels will produce more than 155,000 units of electricity each year which saves 51 tonnes of CO2 from being released into the environment annually.

The team at St Catherine's Health Centre wanted reduce the health centre's emissions with a solar PV system, and do so in a way that was cost effective for the Trust. With a 7 day a week operation and high daytime electricity consumption, the centre is was well placed to benefit highly from Solar PV.

On our own building we have a 50kW solar PV system. Over the last 6 years, the PV system has met 50% of our electricity needs every year. To achieve this, we opted to install a larger system. Of the 47,000 kWh we generate per annum, approximately 54% of this is export and sold to the grid.

Mypower designed and installed a 49.84kWp solar PV system that will meet nearly two thirds of Stewart Golf's annual energy consumption needs. The 178 panels fitted to the roof of the Stewart Golf factory delivers 46,000kWh of electricity a year and saves 15 tonnes of carbon emissions.

As a high energy user costing approximately £25,000 per month, Leeways were looking to reduce their environmental impact and drive down day to day costs. This 500kW PV installation will save over £3 million in electricity costs.

Kernock Park Plants is a valued Mypower customer and has just had its latest solar PV install completed in 2019. Despite the end of the Feed-in Tariff, payback on this 94kW install remains the same.

Monssi wanted to take control of its rising energy costs so Mypower installed a 69kW solar PV system on its unusual 'inverted' roof at its headquarters in Evesham.

As its electricity bills continued to rise, Lower Clopton decided to install solar to lower costs and show customers that by producing electricity from its roof there is a wider picture to consider.

Having been a Mypower customer since 2011, Rocket Rentals recently moved premises and asked Mypower to install 30kWp of solar on their brand new building.

Sheppy's were keen to develop the green side of the business. The cider works produced high levels of electricity, which was perfect for a Mypower solar PV installation.

Let there be light - 1000 year old Gloucester Cathedral reduces its energy costs by 25% and becomes the oldest building of its type in the world to install solar PV.

To continue their commitment towards sustainable mushroom development the business decided to invest in solar which would help reduce their carbon footprint and running costs.

Wiles Greenworld, the second greenest company in the UK, commissioned Mypower to install an 81.8kW solar PV system on the roof of their warehouse.

Cornish potato farm reaps the benefits of solar from Mypower

Mypower advised, designed and installed a solar PV system for an  agricultural landlord who owns a large building used for cold storage and packing.

Allen Fabs own, let and manage their own commercial property portfolio and were looking to increase the attractiveness of their rental properties. 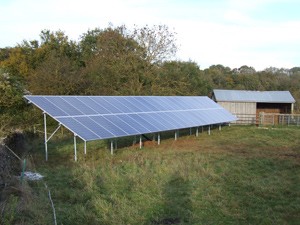 Mr Bullock contacted Mypower after a recommendation from a neighbouring farm. Mr Bullock was looking for a solution to cut grain drying costs, farm expenses and one which would provide a ROI.

The 135 year old club is bringing itself up to date by investing £50 000 in solar PV to reduce the clubs energy bills, reduce the club’s carbon footprint and secure its energy supply for the future.

The Future of Renewable Energies: Predictions for 2021

The unforeseen COVID-19 pandemic has caused great change and there is still a lot of uncertainty about the future. This article will consider the future of renewable energies in 2021 and what can be expected.
Read more >

BMW has presented the series design of its concept BMW iX, which will roll off the lines next year.
Read more >

The International Energy Agency has produced its annual report and it confirms rise of renewable energy.

90% of all new energy generation infrastructure coming on stream in 2020 is renewable.
Read more >

The cost of electricity is rising, and energy is a large expense for most businesses. Read this article to see a few of the top ways commercial properties can lower their energy costs.
Read more >

EV sales in October up by 168% in the year to end October; diesel sales down 55% over the same period
Read more >